16th century Japan was a time of civil war, known in Japanese history as the Sengoku (“Warring States”) period. It was an era of clan versus clan, with powerful warlords (called Daimyos) all vying to make their clan paramount, and themselves the shogun of Japan. By the third quarter of that century the Takeda clan of Kai province in central Honshu seemed poised to defeat all others.

The Takeda had risen to greatness under the wise and able leadership of their Daimyo  Takeda Shingen, called  “The Tiger of Kai“; who ruled from 1542 till 1573. Under Shingen the Takeda had defeated many of their rivals, and their army was second to none in Japan.

“The Tiger of Kai”, Takeda Shingen

It was Shingen who introduced lance-armed cavalry tactics to Japanese warfare. Before this period the Samurai warriors were renown for their skill as archers and as swordsmen; and these two weapons were used both on foot and on horse. But during the reign of Shingen the Takeda Samurai became renown and feared for the ferocious cavalry charges of their lance-armed mounted Samurai.

In 1573, as he marched against the rival Oda and Tokugawa clans, Shingen died. He was succeeded by his brave but less-than-sagacious son, Takeda Katsuyori. He continued his father’s war against the Takeda’s enemies, who were led by Oda Nobunaga and his vassal, Tokugawa Ieyasu. Both these men were very great generals in their own right, with both the ambitions and the resources to oppose the Takeda.

While besieging Nagashino Castle with 15,000 men, Katsuyori was confronted by a large Oda relief force of 38,000, intent on breaking the siege.

Though outnumbered by the Oda relief force, Takeda Katsuyori had seemingly little reason to be concerned.  Much of Nobanaga’s forces was comprised of Ashigaru light infantry, recruited from the peasantry and considered significantly inferior to the Samurai, the professional armored warriors of Feudal Japan. As demonstrated by his tactics in the coming battle, Katsuyori was convinced that no force of peasants, no matter how they were armed or deployed, could stop the ferocious charge of his mounted Samurai lancers.

The bulk of Nobanaga’s forces were Ashigaru armed with the Japanese long spear, the yari. Under most circumstances, the spear is an effective weapon for fending off cavalry. But it relies upon the infantrymen’s steadiness. A cavalry charge is a terrifying thing to face, by all accounts. Infantry that falters and breaks before it are then easily shattered and cut down by the rampaging horsemen. The Takeda mounted Samurai had brutally handled such opponents before, and expected to do so again at Nagashino. Their fearless pride and Katsuyori’s impetuousness was a combination that the wily Nobanaga was able to exploit. 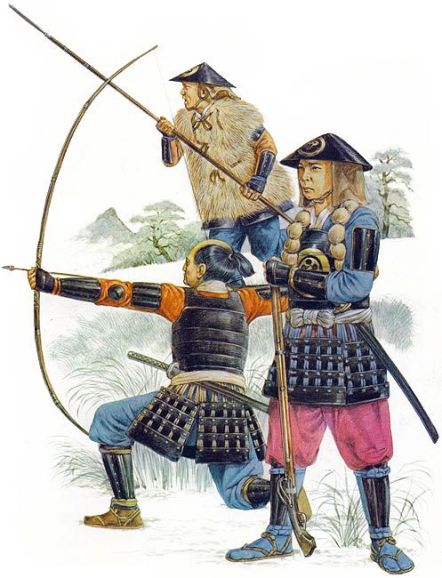 Nobanaga had trained a large number of his Ashigaru to use the relatively recent addition to Japanese warfare: the matchlock arquebus. This was introduced to Japan by Portuguese traders in the middle of the 16th, and had been adopted by many of the warring Daimyos. But none had to date employed so many in battle as Nobanaga did at Nagashino, by most accounts some 3,000. Even more importantly, the Oda matchlock men were trained to fire in rotating volleys, with each rank firing and then retiring to the rear of the formation to reload, while the next rank stepped-forward to fire.

This was  a tactic that was already in use in Europe, but was unknown anywhere else in the world. While many who came to Japan from Europe were missionaries who had no military experience, there were also a large number of merchant seamen trading in Japan. Many of these had military experience in Europe’s frequent wars, and soldiers-of-fortune often took work as guards on trading vessels and at trading posts in such distant places as Japan. So, while we have no evidence that Nobanaga was advised by European military experts or had access to translations of current Western military treatises, either were certainly plausibly available to him.

View of the battlefield from behind the bamboo fence. From here the Oda arquebusiers poured fire at point-blank range into the stalled Takeda mounted Samurai. The village in the background did not exist in 1575, when the Takeda charged from the distant woods.

To stop the charge of the Takeda cavalry, Nobanaga decided to rely upon a combination of improvised field works, and the combined arms aspects of Ashigaru spearmen and arquebusiers working in concert from these. He drew up his army on rising ground, 50 meters in front of a brook. This would put his arquebusiers at optimal range to pierce armor as the charging Takeda Samurai reached and were slowed by the stream. But the key to stopping the fearsome Takeda cavalry lay in a loose palisade of bamboo logs or thick poles Nobanaga had erected across the front of his army. This fence of poles was open and tied together by ropes, the fairly wide gaps between each log giving the illusion of fragility, and allowing gunners to shoot through this screen without hindrance. Horsemen, however, would find penetrating this barrier difficult. To channel them into killing pockets, Nobanaga had left gaps in the screen. These were covered by spearmen and parties of dismounted Samurai ready to meet any who bravely though foolishly attempted to force these very tempting gaps in the defenses.

The Takeda cavalry, some 5,000-6,000 strong, emerged from a wood 400 meters in front of the Oda position. Without pause they charged forward, slowing only at the steep-sided brook. As they emerged onto the opposite bank, they were met by the first of a series of volleys that would continue into the afternoon. Brushing off their losses the Samurai horsemen spurred on, closing the last 50 meters at a cantor. 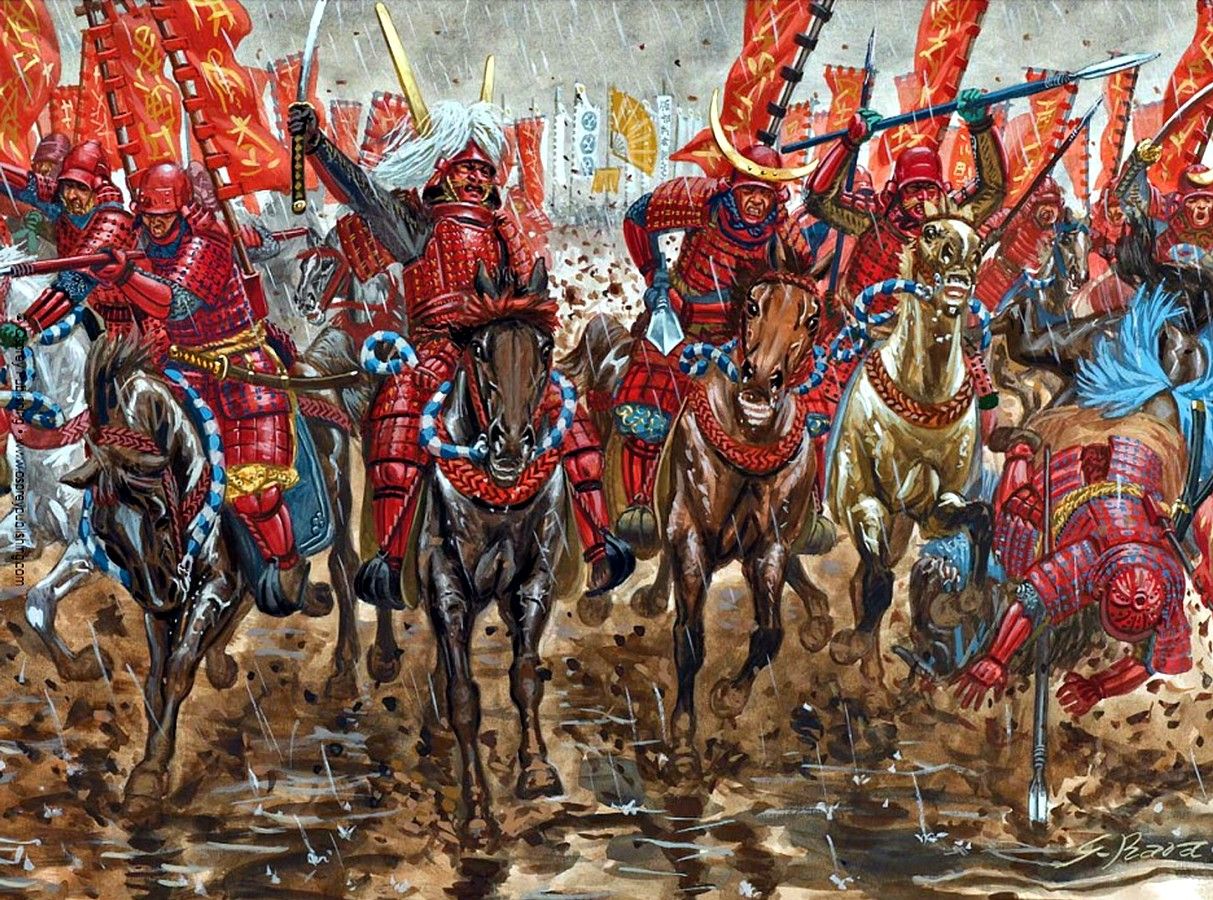 Here they encountered and were baffled by the bamboo palisade. Field fortifications were unusual to Japanese warfare; and nothing like Nobanaga’s dispositions had ever been recorded before in the annals of Samurai warfare.

Their momentum halted by the screen, the Samurai attempted to push their mounts through the barrier, to no avail. Others sought to hack their way through with katana (long-sword) or nodachi (the Japanese Great Sword). But halted as they were directly in front of the ranks of Ashigaru gunners, they were easy targets. As rank-after-rank stepped up to fire at point-blank range, the Samurai fell in heaps!

In the gaps deliberately left for the purpose, groups of horsemen attempted to battle their way through, only to be mobbed from all sides by parties of spear-armed Ashigaru or challenged by rival Oba Samurai. None survived the attempts.

Throughout the next few hours the Takeda repeatedly charged and were repelled, only to reform and charge again. Oddly, no account mentions the role (if any) played by the Takeda infantry, about 10,000 strong. We only know that 3,000 were left to continue the siege of Nagashino Castle. But the 7,000 or so who must have accompanied the Takeda cavalry to the battlefield are not mentioned in any account. Rather like the Medieval French, who emphasized the knightly horsemen and despised the peasant foot, the Takeda seem to have relegated their own infantry to the role of spectators in the rear, taking no part in the day’s fighting. The course of the battle was in many ways reminiscent of the Battle of Crecy, with the arrogant chivalry of Japan repeating the same mistake made by the French knights two centuries before, throwing themselves fruitlessly against an unshakable enemy while making no attempt to bring up their infantry or attempt anything more challenging than a frontal assault.

By mid-afternoon the carnage was terrible, and the spirit of the Takeda at last broke. Their surviving Samurai fled on now blown horses, pursued closely by Oda Samurai on fresh mounts, sallying forth from the defensive lines to turn defeat into bloody rout!

In one afternoon of stupid, stubborn attacks the flower of the Takeda army lay dead on the field; the legacy of Takeda Shingen squandered. The losses to the Takeda were crippling, with estimates ranging from 3,000 to 10,000. Considering the nature of the fighting and the close and bloody pursuit that followed, a higher number seems more likely. Even worse was that all were from their elite Samurai class.

The Takeda would never recover, and would soon be destroyed by the rising power of their rivals.

The mon of the two rival clans: the Takeda (top) and the Oda (bottom)

Oda Nobanaga emerged as one of the greatest generals and political leaders in Japanese history. Today he is numbered as the first of the three great Daimyo who would eventually unite Japan under a new Shoganate. The other two both served under Nobanaga at Nagashino, as subordinates: Toyotomi Hideyoshi, and Tokugawa Ieyasu.

Nobanaga created a professional, combined arms army, and with it began to defeat all rival Daimyos and unify Japan under his leadership. He did not live to complete the task, falling to an assassin’s betrayal. But his work was carried on by his immediate successor, Hideyoshi, the “Napoleon of Japan”. He would inherit a united Japan, and under his lordship even attempted to conquer Korea as well. He, in turn, was succeeded by Ieyasu Tokugawa, who became the founder of the Tokugawa Shoganate. In Japan they have a saying: that “Oda Nobunaga pounded the rice cake, Toyotomi baked it, and Tokugawa ate it!”

That cake, the Shoganate of Japan, was begun on the battlefield of Nagashino. 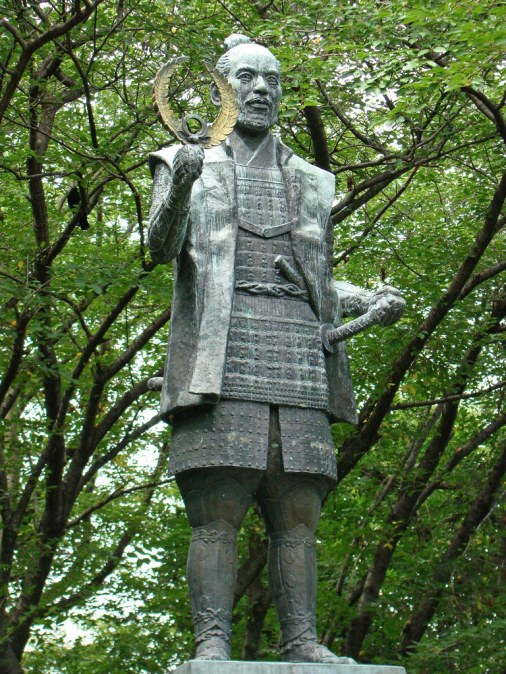 Ieyasu Tokugawa, who lived through the wars of the Sengoku to become Shogan