THE VIKINGS: AN ENDURING FASCINATION! 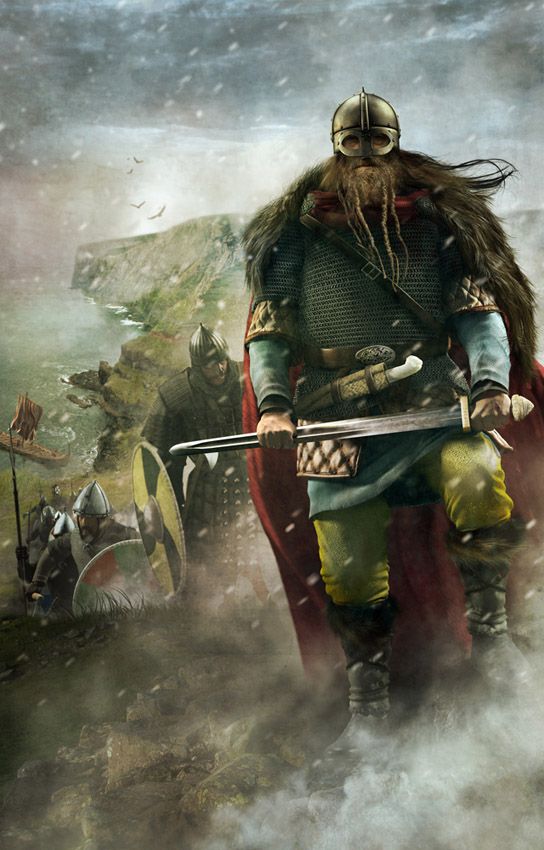 “From the fury of the Northmen deliver us, O Lord.”

This simple prayer was once on the lips of priests and parishioners across all of northern Europe as sleek, dragon-prowed longships carried savage bands of Viking warriors in search of plunder and conquest. In the midst of the “Dark Ages”, a brutal age of hard men, none were harder than the Northmen!

Starting in the late 8th century there occurred one of those sociological events that, from time-to-time, cause historians and social scientists to scratch their heads in fruitless attempt to explain. For reasons imperfectly known, fearsome warriors from the nascent nations of Scandinavia began to raid throughout Europe and the Mediterranean world. One theory is that a global warming trend produced a surplus of population in Scandinavia, resulting in a bold search for new lands to settle. An alternative theory is that the Saxon campaigns of Charlemagne, in the late 8th century, and his suppression of the pagan religion the Saxons shared with the peoples of Scandinavia led to a violent counter-reaction by the Danes and Norse.

However, the simplest explanation may be the correct one: they raided because they could. The initial raids on such isolated places as the coastal monastery of Lindisfarne in Northumbria (793 AD) were so successful and opposition so feeble, they encouraged further aggression.

Whether Danes, Norsemen or Svear, whatever their motivation, to the terrified peoples of the West they were known collectively as the “Vikings”.

It is curious that at a time in our culture when boys are taught to “use their words” instead of their fists, and young men are inculcated with a “political correctness” that emphasizes the modern values of sensitivity, inclusiveness and non-violence, that the Vikings are looked upon with such uncritical admiration. They continue to be celebrated on the screen and in literature. Dozens of films over the years portray the adventures of Viking heroes. The Icelandic Sagas, written in the 13th century, are read by a far wider audience today than perhaps at any other time in history. Across the world, “Historical Reenactors” spend their leisure time dressing as Vikings, recreating their culture and styles of combat. Airing currently on American television is the dramatic series, “Vikings”, based upon the saga of the semi-legendary Viking leader and hero, Ragnar Lothbrok. While on the BBC a series based upon the Bernard Corwell book, “The Last Kingdom“, telling the story of a Saxon warrior who grows-up among the Danes, only to become their greatest foe; is in its second season.

So who were the Vikings; and why such an enduring fascination?

To begin to understand the Vikings, it is necessary to first understand what made their seaborne expeditions possible: their longships. These vessels were a marvel of construction, being shallow drafted and yet immensely seaworthy. The former attribute allowed them to navigate even the smallest river or creek, and appear unexpectedly out of the predawn mists, bringing death and destruction to the unfortunate local inhabitants rising from their beds. The ship’s latter characteristic allowed the Vikings to venture forth across wide seas and open ocean, from Norway to North America, from Britain to Byzantium. 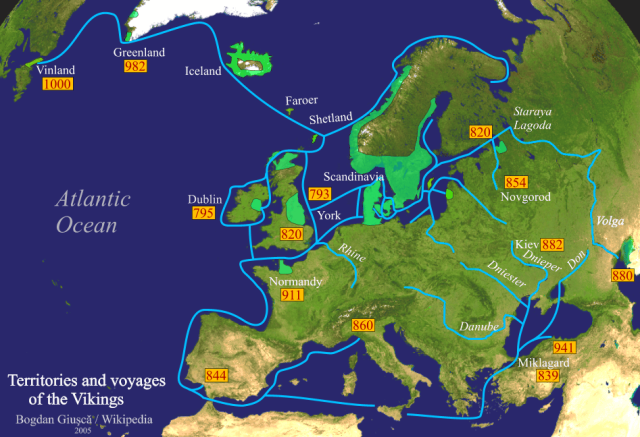 Viking ships varied in size. The smallest and most commonly used was the snekkja (snake or worm). A typical snekkja was 56 ft. in length, 8.2 ft. width, with a draught of only 1.6 ft. It would carry a crew of around 41 men (40 oarsmen and one coxswain). Skeid and Drekkar (Dragons) were larger warships, carrying a crew of up to 100. The Ormrinn Langi (The Long Serpent), the flagship of Norwegian King Olav Tryggvason had 68 rowers, and was perhaps 148 feet long, indisputably the greatest Viking ship of its day. Harald Hardrada had a similar vessel, perhaps even a bit larger, called the Great Dragon, sixty years later. A Viking expedition could be a single ship, packed with warriors, or a fleet as large as several hundred ships of varying sizes, carrying an army. 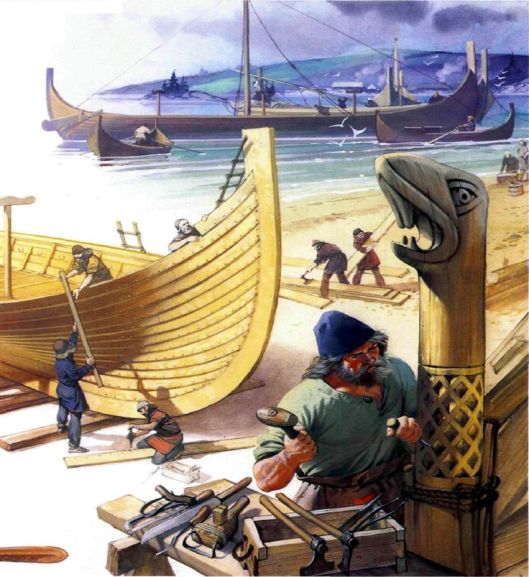 Most Viking expeditions were mere piratical ventures launched by a consortium of neighboring bondi, the free farmers that comprised the majority of men in Scandinavian society at the time. After the spring planting, these hardy freemen would go to sea for the summer, trading and raiding in foreign lands; returning home for the harvest laden with trade goods, looted treasure, and slaves.

Great leaders launched much larger expedition, pillaging or conquering foreign lands in campaigns that lasted for many years. In 911 such an expedition arrived on the northern coast of France. It was led by Hrolf Ganger (“the Walker”), an exiled Norwegian warrior allegedly too tall to ride a horse! His band of Danes and Norsemen conquered this area of France, which became known as Normandy. A descendant of this Norwegian Viking conquered England in 1066, and is known to history as William the Conqueror.

In 864-865, the legendary Danish Viking leader Ragnar Lodbrok was supposedly shipwrecked on the Northumbrian coast of Britain. He was taken before the Northumbrian king, Ælle , who executed Ragnar by throwing him into a pit of snakes. In retaliation, the sons of Ragnar led their father’s army against England in the autumn of 865.

This so-called “Great Heathen Army” was commanded by Ragnar’s capable and much feared sons: Ubba, Halfdan, and first-and-foremost, Ivar the Boneless.[1] In just a few short years these Danes had laid three-of-the-four English kingdoms (Northumbria, East Anglia, and Mercia) beneath their swords. Only Saxon Wessex, led by Alfred the Great, maintained its independence in the following decades. All of the rest of England became for several generations lands ruled by the Danes, known as “the Danelaw”.

In 860, a Viking expedition passed through the Straits of Gibraltar, entering the Mediterranean. Led by the Viking leaders Björn “Ironsides” and Hastein (either of which may, too, have been sons of Ragnar Lothbrok), they raided northern Italy, sacking the towns of Pisa and Luna.

Other Vikings, largely Swedes, settled in Russia and founded such kingdoms as Novgorod and Kiev. Sailing their longships down the great rivers of Ukraine, Viking expeditions even raided into the Black Sea. Groups of Swedish Vikings and Rus warriors (as the mixed Slavic and Svear ruling-class in Russia came to be called) were taken into the service of the Byzantine Emperors, forming the famed Varangian Guard. Later adventurers from across the Viking world came to make their fortunes in this fabled elite force. Harald Hardrada, when but a young exiled prince of Norway, became a captain in the Varangians. He had a successful career,  campaigning for the Byzantines in Syria and Sicily, in the process amassing a great fortune before returning to Norway to seize the throne.

Other Norsemen left their homeland in the 10th century and founded a thriving republic in Iceland (where the language of the Vikings, Old Norse, is still spoken as Icelandic today). Here the folke met on the plains of Þingvellir; where they established the first parliamentary institution in northern Europe: the Alþingi. Meeting at a field below a great flat stone, 28 miles from modern Reykjavík speakers debated and the free bondi made laws.

Above: Þingvellir, Iceland, the site of the ancient Alþingi.

Below: artist conception of the “Althing” in session, 9th-10 century 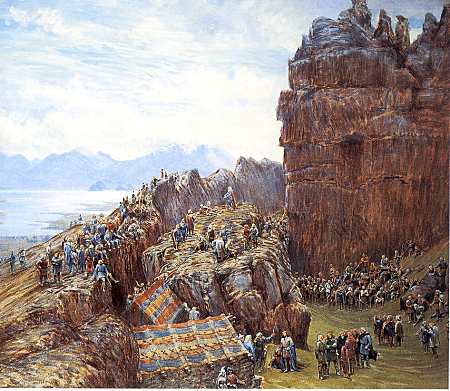 The Althing mirrored similar gatherings of freemen in every Scandinavian country. This fierce love of freedom and respect for the nobility of the common freeman characterized the Vikings wherever they went. It’s a tradition that made its way, via the Danelaw, into English Common Law and tradition. This would lead to Magna Charta, a powerful parliamentary system, and eventually influence the founding principals of America.

Coincidentally, it was a Norseman, Leif Erikson, who made the first recorded and verified voyage from Europe to North America.

He was the son of Erik the Red, founder of the Norse colony in Greenland. (In those climatically warmer times, Greenland was actually green and capable of supporting farming.) Leif ventured westward, exploring and founding a temporary settlement on the east coast of North America, in Newfoundland and Maine (which he named “Vinland”). It would be another four centuries before European shipbuilding caught up with the Norse, allowing Columbus to follow in Leif Ericson’s footsteps, crossing the Atlantic to North America.

The Viking settlement in Vinland failed for many reasons. But foremost of these was the hostility of the Native American peoples they encountered, whom they called skrælingjar. The presence of a unremittingly hostile people living in close proximity made living a normal life in Vinland impossible for the small number of Norse settlers seeking a new life. Within a generation, the colony in North America was abandoned.

Women had a special place in Norse society: with their men away so much of the time, the wives gained a great measure of equality in their society; running the farms and supervising the affairs of the household. Noted for their boldness in speaking their minds, and the readiness with which they asserted themselves, Norse women were perhaps the archetypes of the modern sexually liberated and independent woman.

Such a woman was Freydís Eiríksdóttir (sister of Leif Ericson), who participated in her own expedition to North America. She is credited, while pregnant, with taking up the sword of a fallen warrior and driving off attacking skrælingjar from their settlement. One suspects she would be very much at home today as a business woman, female athlete, or Armed Forces member.

But it was as warriors, not explorers that the Vikings are best remembered: as unapologetic icons of bold masculinity. It is as such that they are admired by so many men today. There is something that resides deep in the male psyche which is attracted to these flamboyant avatars of the Id. As society and civilization seeks to fetter men’s primal “maleness”, turning modern men into hairy women, the image of the Viking warrior becomes even more attractive. Ever-free, never compromising, venturing forth with his band of “sword-brothers” to explore new worlds and return home with stolen riches and captive beauties. This is the fantasy that makes the Viking more popular today than ever before.

“From the fury of the Northmen deliver us!” 3 Responses to THE VIKINGS: AN ENDURING FASCINATION!