GREAT WARSHIPS OF HISTORY: THE BISMARCK

As Hitler prepared for World War II, he planned to interdict British shipping with both submarines (U-Boats) and surface raiders. Of these, the greatest and most celebrated was the Bismarck-class of battleships. Larger than any built by Europe during the war (though smaller than the largest Japanese and American Battleships) the Bismarck and its sister-ship, the Tirpitz caused great concern among Allied naval planners in the early years of the war in Europe.

Launched in February 1939, the Bismarck spent only eight months and one offensive operation at sea before being hunted-down by the British and so wounded its crew scuttled the great ship on May 27, 1941. But that single attempt by the Germans to slip past the Royal Navy in the North Sea and enter the North Atlantic caused near panic in Britain and led to one of the great naval chases in history; becoming the source of books, song and film. 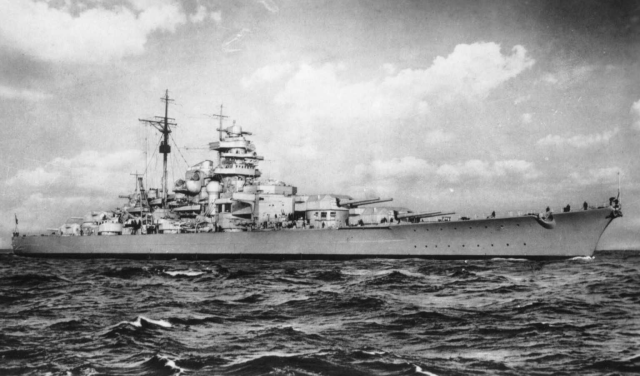 On May 18, 1941 the Bismarck and the heavy cruiser Prinz Eugen sortied from the port of Gotenhafen (now Gdynia, Poland); sailing out of the Baltic and into the North Sea. The two ships took brief refuge in a fjord near Bergen, Norway on 21 May, before steaming for the Atlantic shipping lanes on the 22nd.

The British Admiralty, alerted by the Swedish government that the two German ships had sailed through the Kattegat, began to hunt the Bismarck and Prinz Eugen. The searching ships included the Battleships King George V and Prince of Wales, with escorting destroyers; the battlecruiser Hood and the newly commissioned aircraft carrier Victorious. The cruisers Manchester and Birmingham were tasked to guard the waters south-east of Iceland; a likely route into the shipping lanes for the two German raiders. Other ships soon joined the search. Ultimately an armada of six battleships, three battlecruisers, two aircraft carriers, 16 cruisers, 33 destroyers and eight submarines, along with patrol aircraft would be assigned to what became the largest naval operation of the war to date. 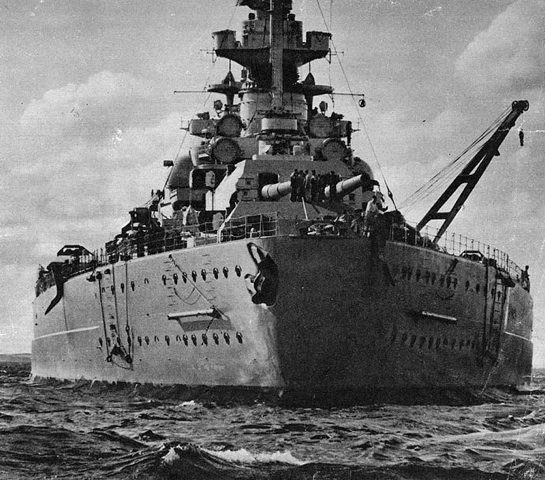 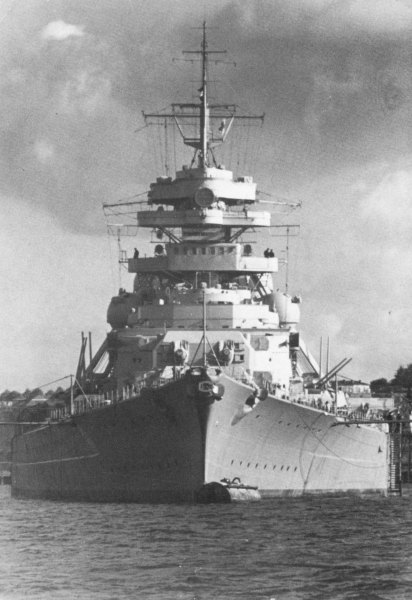 In the early morning of May 24th, Bismarck and Prinz Eugen made contact with the Hood and Prince of Wales in the Denmark Strait, between Greenland and Iceland.

The battle quickly went very badly for the two British ships. Opening fire at 25,000 yards, Bismarck quickly scored a hit on Hood; and fires quickly spread amidships. At 6 am, another shell from Bismarck’s 15″ guns struck one of Hood’s magazines, causing an explosion which broke the battlecruiser’s back. Hood sank within minutes, with all but three of her 1,417-man crew. 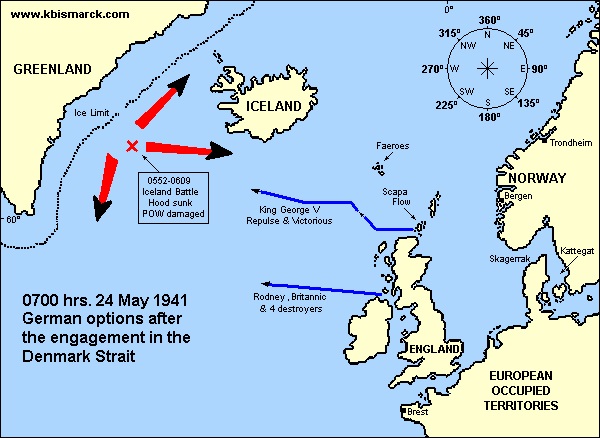 Prince of Wales also received multiple hits, including one to the bridge which wounded her captain. Prince of Wales broke off the action, retreating under cover of a smokescreen.

Bismarck did not survive the Battle of the Denmark Strait unscathed: she suffered a hit near the bow; which pierced a fuel tank and caused her to leak oil continuously and trailing an oil slick in her wake. This allowed the Allies to track the ships progress, making a break into the North Atlantic impractical. For this reason Bismarck instead set a course for the port of Brest; where repairs could be made. Prinz Eugen detached from Bismarck, continuing into the Atlantic to carry out the mission.

The British continued to pursue Bismarck. At 10pm that night (the 24th) the Victorious launched an air attack by nine torpedo bombers from 120 miles away. The attack was unsuccessful, partially due to bad weather and to Bismarck’s anti-aircraft fire; with only a single torpedo striking Bismarck under her bridge, but failing to pierce the ship’s armor. 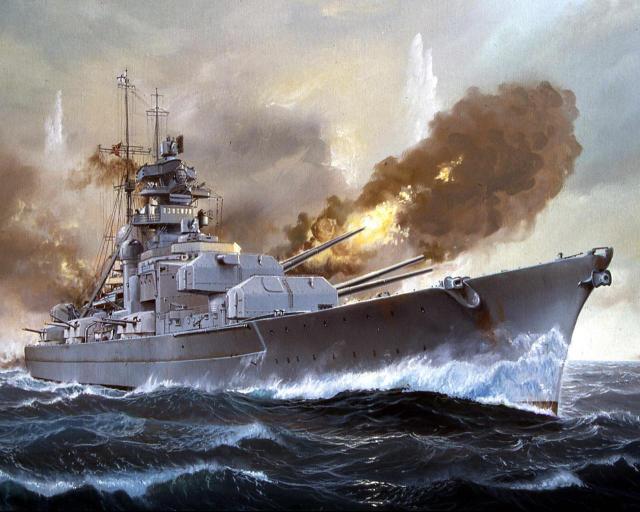 The following day, Bismarck succeeded in evading her pursuers, and escape to Brest seemed attainable. However, at 10:30 am on May 26 a Catalina flying-boat scout plane found Bismarck; still 700 miles from Brest and beyond range of Luftwaffe air cover. The carrier Ark Royal launched an attack, in bad weather, from a distance of less than 40 miles. Bismarck took two or three torpedo hits, one of which inflicted critical damage on her steering. A rudder jammed, and she could now only sail away from Brest. Her fait sealed, Task Force commander Admiral Günther Lütjens aboard Bismarck signalled: “Ship unmanoeuvrable. We shall fight to the last shell. Long live the Führer.”

Bismarck’s end came on the morning of the 27th of May; as her pursuers caught up with her. The battleships Rodney and King George V began pounding Bismarck at 8:47 am. They scored in all 4 hits; one of these (at 09:02)striking the bridge, and likely killing both the ships captain, Ernst Lindemann and Admiral Lütjens. The two British ship broke off the engagement soon after, due to fear of U-boat attack.

Bismarck was fatally wounded, with much of her crew killed or wounded. at 10:40 am, scuttling charges were laid by the crew; and Bismarck capsized and sank. Only 115 survivors were picked-up; while some 2,000 died onboard or in the water. 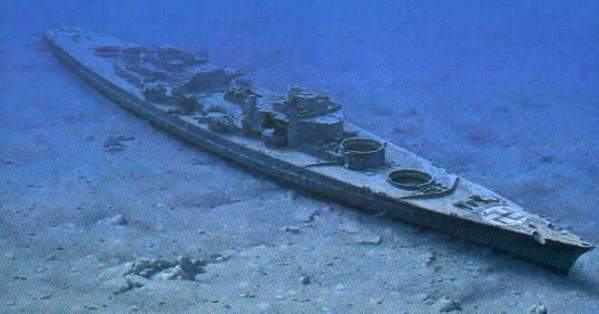 The Bismarck today, resting in its watery grave. 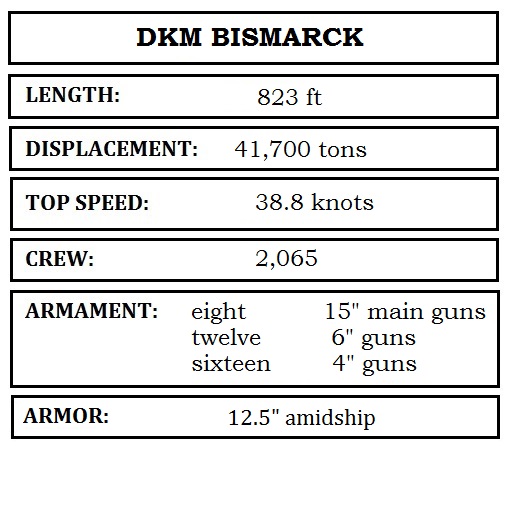 An excellent recreation of the Battle of the Denmark Strait. Johnny Horton’s “Sink the Bismarck”

For more on the Great Warships of History, see also:

Ship of the Line, King of Naval Battle in the Age of Sail

2 Responses to GREAT WARSHIPS OF HISTORY: THE BISMARCK