Posted on February 5, 2020 by barrycjacobsen

Deadliest Blogger’s historical articles organized in a chronological order, to help my readers place them in some sort of historical timeline.

A girlfriend once pointed out that it would be uber-useful to have a reference guide to all of the various pieces Deadliest Blogger has written over the years; placing each in it historical order. Well, for your convenience, here it is!

Here is a list of all of my historical pieces, placed within a chronological timeline:

The Artwork of War – Heroes of Troy and Mycenae:

15th-12th century BC. Bronze Age Greek world, in the Age of Heroes.

The 25 Greatest Commanders of the Ancient World:

1475 BC- 476 AD, Deadliest Blogger’s list of the greatest generals of the Ancient World.

6th-4th century BC. First in a series detailing the history of the Spartans.

5th century BC. Our series on the great warships that influenced history focuses here on the trireme.

The Lion at the Hot Gates: Thermopylae 480 BC

480 BC. The Battle of Thermopylae

Greece is Save By Its Wooden Walls:

480 BC Battle of Salamis

Spartan Invincibility is Destroyed at Leuctra:

4th century BC, part of Deadliest Blogger’s series on the great generals of history.

334 BC, Alexander the Great at the Battle of Granicus

321 BC-281 BC: the “Successors” of Alexander fight over the carcass of his empire; and establish kingdoms of their own. First of a series, each new installment linked at the bottom.

Armies of the Successors: The Antigonids:

4th-2nd century BC, an overview of the army of Macedonia after Alexander till the coming of the Romans. First in a series.

Armies of the Successors: The Seleucids:

4th-2nd century BC, overview of the army of the largest of the Diodachi kingdoms. Second in the series.

Armies of the Successors: The Ptolemies:

4th-1st century BC, overview of the army of the Ptolemaic Macedonian kingdom of Egypt. Third in the series.

3th century BC, Deadliest Blogger’s look at the man who shook Rome to its roots. Part of our series on the greatest generals in history.

218 BC, an examination of how and why Hannibal chose to bring an army across the snowy Alps to attack his Roman enemy.

216 BC, and Rome suffers one of its greatest defeats.

Phalanx vs Legion: Closing the Debate:

3rd-1st Century BC: the Roman legion eventually replaced the phalanx as the dominant force on the battlefields of the Classical World. Which system was superior, and why?

2nd century BC, Antiochus IV’s harsh policy of forced Hellenization ignites a revolution among his Judean subjects; leading to the first Hanukkah celebration.

Disaster In the Desert: Crassus at Carrhae:

54 BC, a Roman invasion of Mesopotamia leads to the death of Crassus.

1st century BC,  Deadliest Blogger’s look at the “noblest Roman of them all”. Part of our series on the greatest generals in history.

Terror in the Teutoburg Forest!

9 AD, and the Roman occupation army of Germany is ambushed in the depths of the Black Forest. The results were to have long-ranging effects on the future of the Roman Empire and Germany.

Adrianople: Twilight of the Legions:

378, the Goths deal the Romans a historic defeat. But why was it such a catastrophe for the empire?

The Age of Arthur:

5th-6th century AD Britain. Were the legends of “King Arthur” and his Knights of the Round Table based on historical events and characters? First in a series.

Attila is Stopped at the Catalaunian Fields:

451, the “Scourge of God” invades the Western Roman Empire; and is stopped at Chalons! 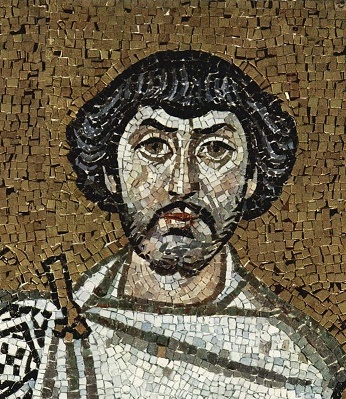 530 and the Eastern Roman general Belisarius wins his first great battle against a far larger Persian army. His use of interior lines and field works is a text book case study in generalship.

6th-early 7th century, the Eastern Roman army is transformed by the methods of Belisarius, which experiment began with his own household regiment. Part of our series on “Elite Warriors of the Dark Ages”.

7th cent, the Eastern Romans create a revolution in naval warfare with a flame-throwing weapon mounted on their nimble galleys. Part of our series on the great warships.

8th-9th century, the armored cavalry elite of Charlemagne and the Frankish Empire become the genesis of the Medieval paladins. Part of our series on “Elite Warriors of the Dark Ages”.

The Vikings: An Enduring Fascination:

793-1066: “From the fury of the Northmen deliver us!” A brief look at the Vikings, and why they continue to fascinate us to this day.

England is Born at Bloody Brunanburh:

937, the grandson of Alfred the Great becomes the first king of a united England.

10th-11th century elite Viking brotherhood. Part of our series on “Elite Warriors of the Dark Ages”.

1014 and Brian Boru, faces a coalition of enemies. The Battle of Clontarf was a Pyrrhic Victory, which ended Ireland’s one chance to unit into a single, powerful kingdom.

11th century, following England’s conquest by the Danes under Canute the Great, the English thrown was guarded by an elite body of Anglo-Danish warriors: the Huscarls! Part of our series on “Elite Warriors of the Dark Ages”.

11th-12th century, the Norman knights were the most feared heavy cavalry in Europe. Part of our series on “Elite Warriors of the Dark Ages”.

The year 1066 could be called the Year of the Three Kings. The events culminated in the battles of Stamford Bridge and Hastings.

11th-14th cent, the Byzantine emperors are guarded by an elite body of Northmen, Rus, and Englishmen. Part of our series on “Elite Warriors of the Dark Ages”.

The Terrible Day: Disaster at Manzikert:

1071 and imperial Byzantium suffers a terrible defeat at the hands of the Seljuk Turks; and Anatolia begins the transformation into “Turkey”.

The 25 Greatest Commanders of the Middle Ages:

475-1453, Deadliest Blogger’s list of the greatest generals of the Middle Ages.

The Crusades: A Politically Incorrect View:

1095 – 1204 and tens of thousands of Christians marched east to liberate the “Holy Land” from its Muslim conquerors. A multi-part series on the history of the Crusades.

Myriocephalon: the Byzantine Resurgence Comes to a Disastrous End

1176, the Emperor Manuel Komnenos leads the last great army of the Byzantine Empire into Turkish territory to recover the lost lands of Anatolia. In the ravines and passes of Myriocephalon he is ambushed.

The Knights of France Defeat the Power of the Empire at Bouvines, 1214

Philip II “Augustus” establishes France as the premiere power in Western Europe and the chivalry of France as the greatest fighting men in Christendom.

13th century AD, Chingis (Genghis) Khan unites the peoples of Mongolia and creates the world’s largest land empire. Part of our series on the greatest generals in history.

1241 and the northern thrust of the Mongol invasion invades Poland. There they meet the armies of Poland and Bohemia.

End of the Caliphate: The Mongol Sack of Baghdad:

1258 and the greatest city in the Islamic World is captured and pillaged by the advancing Mongol horde. In its ashes the last Abbasid Caliph is put to death.

Clash of Titans: Tamerlane at Angora, 1402

The Ottoman Turkish Sultan Bayezid the “Thunderbolt” engaged the invading army of Timur the Lame, the last great Mongol conqueror.

Slaughter in the Mud:Henry V at Agincourt:

1415, young king Henry V of England renews the 100 Years War by invading France. In the muddy fields of Agincourt a tired and hungry English army is brought to bay by a pursuing force five times its size. On St. Crispin’s Day Henry’s wins a miraculous victory.

A Most Sanguinary Affair: Bloody Towton:

1461, the greatest battle of the War of the Roses, and the largest ever fought on English soil.

1485, and the War of the Roses ends with the defeat of Richard III.

Marignano, Battle of Giants, Ends the Myth of Swiss Invincibility:

1515, King Francois I of France defeats the hitherto invincible Swiss to contest the rule of Northern Italy.

Clash of Titans: Tamerlane and “Thunderbolt” meet at Angora!

In 1402 the last great Mongol conqueror, Timur, crossed swords with the emerging Muslim super-power of the day, the Ottomans; under their triumphant Sultan, Bayazid the “Thunderbolt”.

Mughal: “The Tiger” Founds an Empire at Panipat:

1525, a descendant of Genghis Khan and Tamerlane defeats the Sultan of Delhi and founds the Mughal Empire.

The ambitious and capable Oda Nobunaga defeats the hitherto invincible Takeda samurai with a force of trained matchlock-armed peasants and the clever use of field fortifications.

1590s, the Japanese invasion of Korea is thwarted by revolutionary iron-clad “Turtle Ships”. Part of our series on the great warships.

The Lion of the North Roars at Breitenfield:

1631, Gustavus Adolphus of Sweden leads the Protestant forces to victory over Tilly and the Imperial Catholic tercios.

16th cent, the English lay the foundations for naval supremacy with a revolutionary ship design. Part of our series on the great warships.

The Last Hurrah of the Winged Hussars:

1683, the legendary Polish cavalry broke the Siege of Vienna and saved Europe from the yoke of Islam.

Great Warships of History: The Ship of the Line:

17th-19th cent, the battleships of the Age of Sail. Part of our series on the great warships.

18th century AD, the career of “Old Fritz” is examined in another installment of our series on the greatest generals in history.

Late 18th-early 19th century, another in our series on history’s greatest general.

Marshal Murat saves the day with one of history’s greatest cavalry charges.

Deadliest Warrior takes a deep dive into the Waterloo Campaign in this multi-part series.

A Pride of Peacocks: Uniforms of the Napoleonic Era

A visual tour of history’s most splendidly uniformed armies.

1814, the British gambit aimed at seizing the mouth of the Mississippi River is thwarted by Andrew Jackson’s rag-tag force at New Orleans.

The Battle of the Alamo is examined in detail.

Massacre in the Passes: Elphinstone’s Disaster: 1842

The First Anglo-Afghan War leads to one of Britain’s most humiliating defeats.

1861-1865, the career of America’s “Wizard of the Saddle” is examined in this installment of our series on history’s greatest generals.

Zulu: Death and Redemption in the African Sun

1879, Britain’s Zulu War opens with disaster and a desperate victory as Deadliest Blogger examines the battles of Isandlwana and Rorke’s Drift.

The British battled the Dervishes in the Sudan.

Germany’s Schlieffen Plan: A Study in Economy of Force

1914, the outbreak of WW-I and the Germans develop a brilliant plan to defeat France in months and end the war in the west. What went wrong?

1940-1945, the life of America’s greatest WW-II battle commander is examined.

Great Warships of History: The Bismarck

1941, Germany’s greatest warship threatens Britain’s supply line and leads the Royal Navy on a merry chase! Part of our series on the great warships.

1935-1945, and examination in multiple parts of Hitler’s elite combat force, the Waffen SS.

Great Warships of History: The Yamato

World War Two, part of our series on the great warships.

God Sides With the Big Battalions

An examination of some of the principals of war, force multipliers, and the danger of relying upon small elite forces.

A “bite-sized” look at history.

“History Bites”: Son of a Gun

A “bite-sized” look at history.

If World War One Were a Bar Fight!

If World War Two Were a Bar Fight!