THE KNIGHTS OF FRANCE DEFEAT THE POWER OF THE EMPIRE AT BOUVINES, 1214!

In one of the most decisive battles of the 13th century King Philip II Augustus establishes France as the premiere power in Medieval Europe.

Philip II “Augustus” can fairly be called the greatest of France’s Medieval monarchs. Not since Charlemagne had a French king wielded such royal authority over the fiercely feudal nobility that ruled the duchies and counties of France.

But his reign began at a very different place.

When he ascended the throne in 1180, Philip II of the House of Capet inherited a royal power whose writ barely extended beyond the area immediately surrounding his capital of Paris. The true rulers of France were its great feudal magnates. While owing fealty to the Capetian kings in Paris, the nobility had a free hand in their own lands, acting as near-independent overlords. The king only directly ruled, and drew revenues from, the crown lands (domaine royal); and the history of his house was a constant struggle to expand the royal domaine.

The strongest and most independent of the great lords throughout the 11th and 12th century were the Dukes of Normandy; one of which, in 1066, also became the King  of England following the Norman Conquest.

The 12th century in Europe could fairly be called the Norman Century, as these intrepid descendants of Viking settlers conquered England, created a Duchy (later a kingdom) in southern Italy and Sicily, and won a principality in Antioch and northern Syria[1].  In the mid-century Henry II Plantagenet, scion of both the Norman and Angevin houses, combined his inheritance in France and England with those of his wife, Eleanor of Aquitaine to create a burgeoning Plantagenet Empire. By the time of his death in July of 1189 Henry II ruled over more of France than did the King of France. 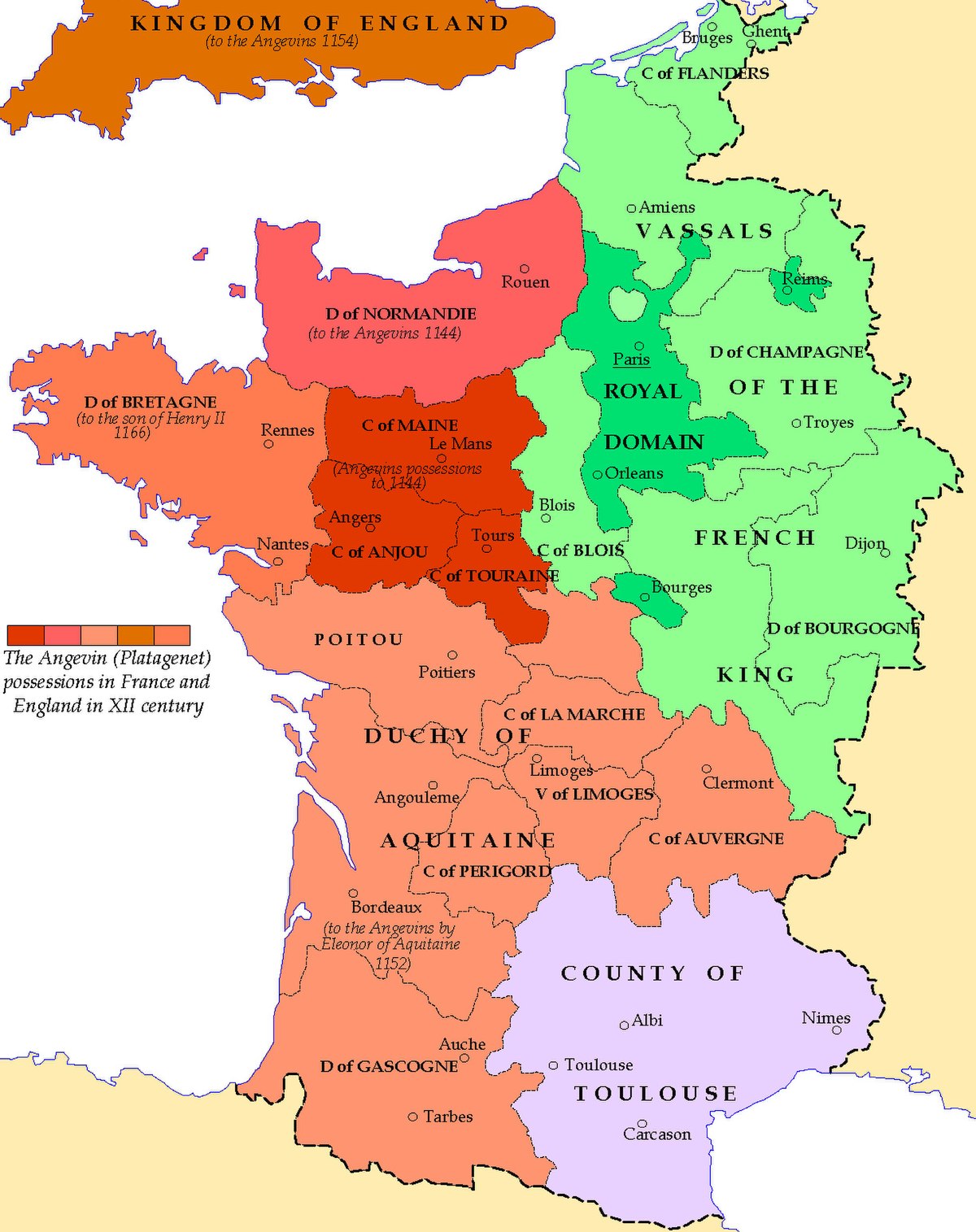 Philip II’s early years as king of France were spent in political and occassional military struggle with the brilliant Henry. At times he allied himself with one or more of Henry’s often rebellious sons, attempting to drive a wedge into and exploit fractions within the House of Plantagenet. In all of these he was ultimately thwarted.

But Philip learned, and his early struggles with Henry II made him a far more canny politician than most of his predecessors.

Henry’s son and successor, Richard Cœur de Lion, spent most of his 10 year reign absent on the Third Crusade or a prisoner in Austria. But Richard was a renown warrior and military leader, and while he lived the Plantagenet lands in France were (for the most part) defended against Philip’s ready aggression. 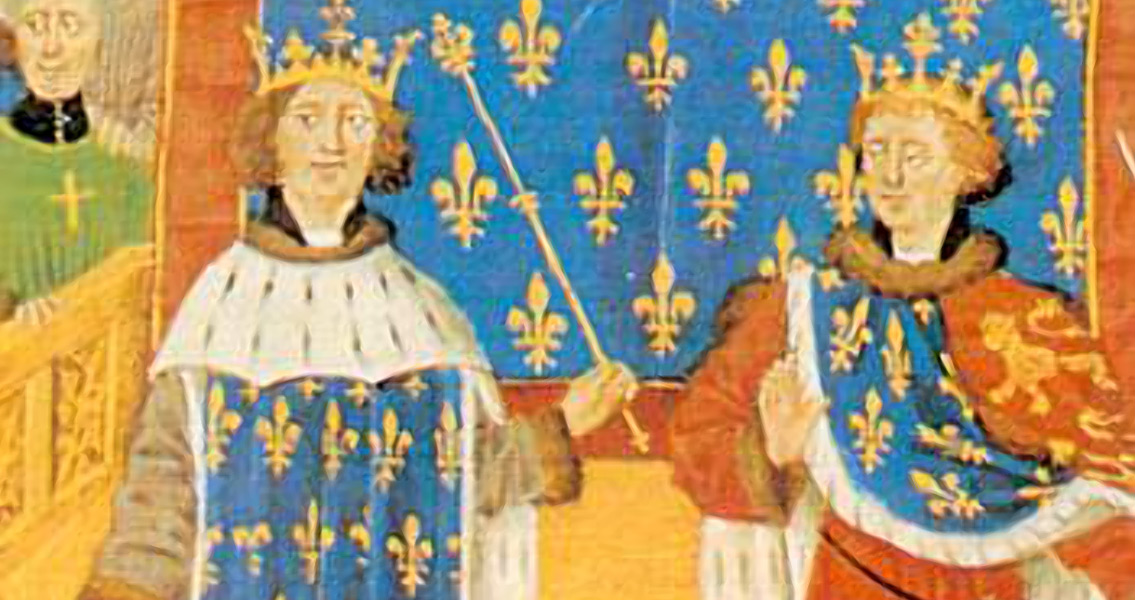 Philip II and Richard the Lionheart

But after Richard’s death in 1199 the Plantagenet realm passed to his mercurial brother,  John I (Prince John of “Robin Hood” fame). John was called “Lackland”, because of all Henry II’s four sons he was the only one to hold no lands during his father’s reign.[2]  This lack of experience (combined with a temperament wholly unsuited to the task of ruling a feudal kingdom) caused the Plantagenet lands in France to fall away under the relentless predation of Philip of France.  By 1204 all of the Plantagenet Empire in France had been taken by Philip save the Duchy of Aquitaine in the south.

Following the loss of Normandy in 1204, John sought to restore the Plantagenet lands in France through a series of (mostly failed) military efforts. In 1212 John successfully concluded alliances with his nephew Otto IV “the Welf”, a contender for the crown of Holy Roman Emperor in Germany; as well as with Count Renaud of Boulogne and Dammartin and Count Ferdinand of Flanders (a Portuguese royal prince, who acquired the title and lands of Flanders through marriage to the heiress). Though baronial unrest in England delayed the campaign[3], by 1214 John and his Imperial allies were prepared to strike.

However, as is so often the case with even the best laid plans, it soon went awry.

In response to these movements Philip took personal command of the northern front against the emperor and his allies, while his son Prince Louis was dispatched to contain John coming from the southwest. As John advanced he enjoyed some initial success against Louis, recapturing Anjou by late June. But when faced with battle, John’s bad relations with his vassals damaged his cause: the local Angevin nobles refused to advance; and, left with insufficient forces, he was forced to retreat back to the port of La Rochelle.

In the meantime, Philip, who had grown as a commander since his early years on the Third Crusade (where he played “second fiddle” to John’s elder brother Richard the Lionheart), now turned upon the Germans. He outmaneuvered the sluggish Otto and forced a battle on his own terms, on a plain suitable for cavalry; the arm Philip most trusted in.

At this period in history France was the cultural center of Europe, from which the cult of chivalry and the troubadour had sprung. But the Holy Roman Empire was considered the dominant military power. At Bouvines the chivalry (knights) of France would have the opportunity to test their prowess on the battlefield against their Teutonic rivals. This would be the greatest battle fought between the East and West Franks since the dissolution of Charlemagne’s empire[4].

To the field at Bouvines Philip brought an army of between 5,500 and 7,600 men. The all-important cavalry component, the battle-winners of 13th century Europe, numbered roughly fifteen hundred. Most of these were in fact knights, rather than just mounted sergeants or squires[5]. The French were slightly outnumbered by their Imperial and allied opponents, who numbered as many as 9,000 and may have outnumbered the French in mounted knights by a few hundred. An English contingent, led by the renown William Longsword, Earl of Salisbury (King John’s illegitimate half-brother) comprised part of the Imperial right.[6]

The French were drawn up facing northeast, the emperor and his allies the opposite. Both armies placed their infantry in the center, the heavy cavalry divided on both wings, and a mounted reserve behind the center. On the French side, Philip placed the knights of Champagne and Burgundy, commanded by the Duke of Burgundy, on his right. On his left was a mixed force from mostly Ponthieu and Brittany, commanded by Count Robert of Dreux (brother of the Count of Brittany) and Count William of Ponthieu. The French infantry in the center were town militia drawn from the Île de France and Normandy. His central reserve was composed of 700 knights, 175  of which were members of his own Mesne du Roi, his household knights. The military standard of France, the sacred  Oriflamme, flew behind the infantry and in front of the king’s reserve.

Otto deployed his forces with Renaud de Dammartin, Count of Boulogne and Dammartin commanding the right, composed of Brabant (Low Country) infantry and English knights under the command of William Longsword.  The Flemings were placed on the Imperial left, under the command of their lord Count Ferdinand. Otto himself commanded the Imperial center, along with Theobald Duke of Lorraine, Henry Duke of Brabant, and Philip Courtenay, the Marquis of Namur. In front of the center the emperor placed high-quality Flemish and Saxon infantry. Otto was himself surrounded by a guard of 50 picked German knights, renown for the their stature and prowess in tournament and battle.

The front of both armies stretched nearly three miles across.

The battle began on the French right, and soon became general as both armies advanced straight ahead and engaged the forces before them. No attempt was made by either commander to maneuver for tactical advantage. Nor was there coordination between the divisions of either army, and even within each division feudal households seem to have operated as independent entities. Knights on both sides sought out and fought each other for personal reputation and to gain ransoms from capture of noble opponents. In essence this was a tournament writ large, the grand melee where knights fought for glory and to gain captives for rich ransoms. A chronicler known as the Anonymous of Bethune even praised the fighting as “good tourneying”!

In the center the Imperial Flemish and Saxon infantry, considered the best in Western Europe, pushed back the French town militia, dismounted sergeants and feudal levies. Philip was forced to lead forward his reserve of 700 knights to try to stem their advance. In the ensuing melee the king was unhorsed and almost slain when dragged from his horse by a hooked pole arm. Only the quality of his armor and the steadfast loyalty of his household knights prevented his death; and Philip was remounted on a borrowed horse. The Imperial foot were only driven back after a furious melee.

“Lances are shattering, swords and daggers hit each other, combatants split each other’s heads with their two-sided-axes (?), and their lowered swords plunge into the bowels of the horses when the iron protection which covers the bodies of their masters prevents iron from penetrating”. [7]

On the allied right, William Longsword and Count Renaud charged forward, initially pushing back the French left and succeeded in inflicting heavy casualties on Count Robert’s forces and threatening to turn the flank. Meanwhile, on the opposite wing, the

Flemish knights were bested by the Burgundians when Count Ferdinand, exhausted after hours of combat and weakened by wounds, was taken prisoner. After this the Flemish resistance collapsed and many fled.

In the center, Otto led his fresh mounted reserve of Imperial knights against Philip’s household cavalry. In the resulting melee, and despite their fatigue from earlier combat, the French knights got the better of their German counterparts. The emperor was cut off from his bodyguard and assaulted by one French knight after another. Wielding a falchion “like a halberd”,  Otto struck fiercely to all sides, fending off one attacker after another. His horse was killed beneath him, and this time it was the emperor’s turn to be rescued and remounted by his loyal retainers. With the Imperial center collapsing around him, and the Burgundians now joining the fighting here after the collapse of his Flemish allies, Otto could only escape capture by fleeing the field. But not before the French captured the Imperial banner bearing the double-headed eagle.

The battle continued on the French left, where the English under Longsword pressed hard their opponents until the Earl was unhorsed and captured by Philip of Dreux, the fighting Bishop of Beauvais, brother of Count Robert and a veteran of the Third Crusade. The French pressed their advantage as the English contingent lost coherence, and the survivors of the Imperial right formed a circle of Brabanter pikemen, under Count Renaud and fought to the bitter end. Renaud was captured at last, and his men slaughtered; ending the fighting at Bouvines and leaving Philip triumphant.

The French victory at Bouvines had wide-ranging consequences.

In Germany it led to the emperor Otto’s deposition. He was replaced  by his rival, the Hohenstaufen prince Frederick II. Frederick would go on to become one of the most powerful and celebrated rulers of the Holy Roman Empire, an enlightened prince who would come to be called by his contemporaries Il stupor mundi (“the astonishment of the world”).

Bouvines doomed John’s last chance of recovering the lost Plantagenet lands in France. His humiliating loss would lead to a baronial rebellion against his tyrannical rule in England; and the following year, at Runnymede, his barons would force him to sign the Magna Charta, England’s first step towards a constitutional monarchy and parliamentary democracy.

In France Philip would use the prestige of his victories and the lands captured from John to establish the tradition of a strong, central monarchy. Bouvines also granted the chivalry of France “bragging rights” as the most valorous knights in Christendom; a reputation they would maintain throughout the Middle Ages.

2 Responses to THE KNIGHTS OF FRANCE DEFEAT THE POWER OF THE EMPIRE AT BOUVINES, 1214!